Dr. Wen Zee, of Shanghai, China, has for many years made frequent and significant contributions to the taijiquan community with his in-depth articles on taijiquan. His articles are regularly published in major martial arts journals in Beijing, Shanghai, Taiwan and the United States. He also co-authored, along with grandmaster Ma Yueh Liang of the Chian Chuan Taijiquan Association in Shanghai, the book, Wu Style Tui Shou. In addition, Dr. Zee assisted Grandmasters Ma Yueh Liang and Wu Ying Hua with their book, Wu Taijiquan, Forms and Applications of the Original Style. 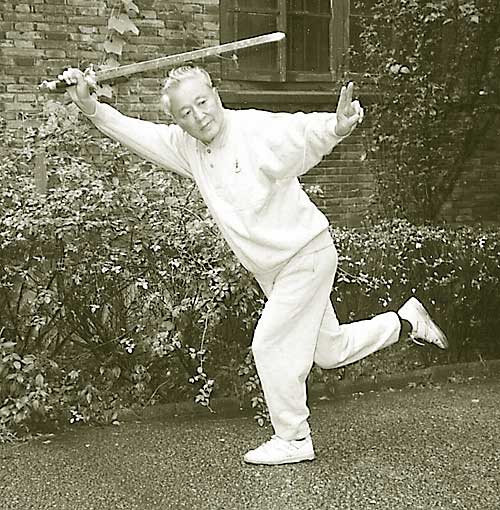 Dr. Wen Zee, a 78 year old cardiologist, has spent most of his professional career in the No. 6 People’s Hospital and the Central Hospital in the Jin An district, both in Shanghai, China. He is trained in both Western and traditional Chinese medicine. Dr. Zee began to learn taijiquan as a young seventeen year old boy. His teacher for the past several decades is the renown grandmaster Ma Yueh Liang, son-in-law of the founder of the Wu family style. Dr. Zee is also a trustee of the Chian Chuan Taijiquan Association, as well as the editor of the Association’s newsletter. He feels strongly that the research of taijiquan, using modern methods and technology, should be done to better understand its health benefits and its martial functions.

As a result of his long medical career and decades of empirical observation, Dr. Zee maintains that taijiquan is the exercise of choice for hypertensive and coronary patients. Treating hospital patients with taijiquan has brought significant improvement to those individuals. Taijiquan, as a physical therapy, lowers high blood pressure significantly and permanently. The exercise also ameliorates the chest pain of cardiac patients.

The purpose of taijiquan is good health, longevity and well-being that extends well into old age. Dr. Zee often says that for a long time taijiquan practitioner like himself, the practice is actually a rest for the body and a period of pleasure for the mind and spirit. He predicts that the next century will witness the spread of taijiquan throughout the world as a health maintenance method. He also believes that there will be a revolution in the concept and method of sports. Most people think that exercise is merely moving the extremities of the body, and movement is work done only by the muscles. Exercise is thought to be training and conditioning the muscles to do that work. Rest, then, is thought to be the cessation of that movement in work. However, it is clear that muscles do nothing without the function and control of the brain and mind.

Oriental philosophy teaches that the state of mind is important in maintaining well being. A taijiquan classic teaches that the mind and the qi are the master, the bones and the flesh are the servant. Exercise without the harmonious intervention of the mind is imperfect, useless and may even be harmful. Numerous scientific researches and empirical studies have shown that strenuous exercises, such as long distance running, often harm the body, sometimes even to the point of being fatal. This is especially true for those middle aged and older.

Taijiquan is based on the theories expressed in the I-Ching, the Book of Changes, the theory of yin and yang. Studying some of the basic rules of the I-Ching will help the learner understand and reach a proficient skill level in taijiquan. For example, many Westerners are confused by the concept of stillness as it applies to practice. This is due, in part, to ignorance of the theory of yin and yang. Yin represents female qualities. Yang represents male qualities. Male gives, female receives. Hardness and softness, movement and stillness, are yin and yang. The two parts cannot be separated. Movement and stillness are relative terms. Absolute stillness does not exist. There will always be a little yin in yang, and likewise, there will always be a little yang in yin. Yin and yang are in ­everlasting, continual movement. The I-Ching is the root of all ancient Chinese culture; taijiquan is no exception.

The symbol of taijiquan is a dynamic model of the theory of yin and yang. The middle curve represents everlasting continual change and movement. Since there is movement, it follows then that there must be yin and yang and, therefore, the energy that we call qi. Yang moves subjectively and continually. Yin follows yang. As yang increases, yin decreases, and as yin increases, yang decreases. The yin and yang parts of the symbol are equal. It also reflects time and creation from movement. Without movement, there is no time. Space and time may also become one. This is realized when one reaches a deep level of practice.

The term tai means the greatest, and ji means the ultimate. This means that nothing exists beyond these two in the concept of time and space, not even by imagination. Taijiquan ­occupies an objective existence, it is ­materialism and not idealism. The term wu chi is a concept of Taoism (Daoism) that means nonexistence. However, non­existence can never exist. This defies the philosophy of the I-Ching, the basis of all Chinese culture.
When exercising in joint-hands, if the strength used is subjective and antagonistic, it is called hard, or gang, force. If force is not antagonistic, but rather adapts and changes with the incoming hard force, it is called soft, or rou, force, regardless of whether it is large or small. 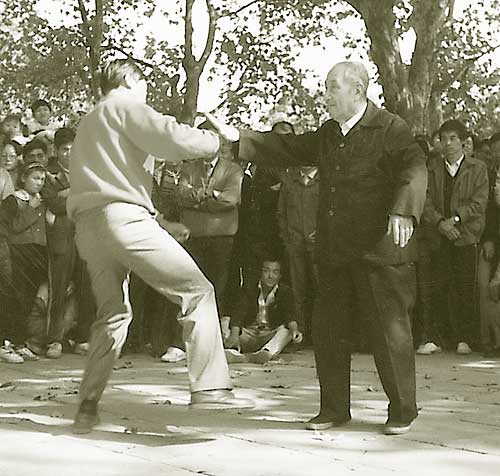 Beginners in the joint-hand exercise are advised to not use yang force, rather, they should use yin force. To use yin is to neutralize, adapt, receive and change with the incoming yang force. If this is not learned, nothing may be gained, even after years of training. A key point, often ignored by push-hands practitioners, is that it is an exercise in managing the strength of the body. For this reason, the term “strength perception” was adopted. Strength is invisible. It is managed by feeling only. To attack without perceiving the strength of the opponent is often a futile effort. To divert without perceiving the strength of the attacker is also often futile, since the opponent may not follow.

A key problem is to make one’s own strength smaller than that of the opponent, as small as possible. This is not easy work. It takes a long time of practice to learn to use small force. Strength perception is the first step of crossing the threshold of skill development in taijiquan. It is like pulling a cord attached to the nose ring of a large bull. If pulled too hard, the bull will resist and pull back. If pulled too lightly, the bull will ignore it and not move. Only when the chord is pulled perceptively, without too much force, will the big animal follow your intention willingly.

Being properly relaxed, or sung, is also critically important. Intention of movement is shown, for example, when the muscles of the arm are tensed and hard. Being properly relaxed enables one to prepare for receiving and then responding. If any part of the body is rigid, the qi will be blocked and, therefore, not go throughout the body smoothly. Sung requires lightness; tenseness results in heaviness.

When exercising joint-hands with a master of high skill, the student is often easily pushed away so smoothly that he is unable to tell how it happens. A master uses very little strength; he may not even touch the student’s body. This may occur when the student’s acting strength is controlled, rather than just his muscles or body. Unfortunately, most ignore this basic rule.

Practice of form work also requires use of the same principles. The mind is used to manage and control the movements and strength. Form work is fundamental to cultivating internal strength or qi. Without solid form work, a student cannot develop good skills in the joint-hands exercise. Daily practice of the forms is essential and required even when the push-hand skill is mature, regardless of the learner’s age. In form practice, it is essential to have naturalness, to be straight, to be centered or zhong din, to be relaxed and to be completely at ease. All these are characteristic of Wu family taijiquan. By maintaining these qualities, progress is endless.

After all is said and done though, we must remember that the final purpose of developing and practicing taijiquan is the salubrious effect it has on health and one’s life. The classic teaches the intent of Chang San Feng. The development of taijiquan was not merely to practice a martial art, but rather for men of merit to prolong life and cultivate eternal spring and vigor. Its practice and lifestyle promote well-being and longevity. This is particularly apropos now, in light of the upcoming changes in our health ­system and in the way we Americans use our health care and medical ­service system.

Over the years, Dr. Zee has done considerable scientific research and clinical trials on the effects of taijiquan practice on health. The results of his long and extensive work clearly demonstrate that taijiquan is highly suitable for lowering hypertension. Long clinical observation and laboratory analyses show blood pressure is lowered significantly and permanently. Chest pain, as related to coronary heart disease, is ameliorated. The function of the immune system is boosted. Some evidence even suggests a possible correlation with long term practice and the prevention of cancer. Dr. Zee says that among members of their Association who have died after the age of eighty, very, very few deaths were attributed to cancer. He would like to see Western research on this possible benefit.

A study in the spring of 1993 by the Association to determine the NK (natural killer) cells present in the blood of practitioners with an average age of over sixty years and with over twenty years of taijiquan practice, found the acting NK cell count in the blood of taijiquan practitioners to be significantly higher than that of the general population. Master Ma Yueh Liang, then 93 years of age, was also a participant in the study. Further, the NK count was found to increase remarkably, nearly instantly, after a twenty five minute period of Wu style form practice. The count returns to normal levels after approximately two hours. The natural killer (NK) cell is a newly discovered lymphocyte which has been proven to have an important function in maintaining and increasing the human body’s immune ­system. It kills cancer cells.

Dr. Zee is now working on his book detailing the health effects of taijiquan practice. [editor's note: His book entitled "Wu Style Tai Chi Chuan: Ancient Chinese Way to Health" was published in 2002, after this article was printed in our journal]

By LeRoy Clark, retired civil engineer. He studies, practices and teaches in Washington and Nevada.