Every anniversary of Sifu Gene Chen's passing, I am reminded of the profound influence he has had and continues to have in my life and my chosen path as a Doctor of Chinese Medicine. Sifu's inspirational lectures on Chinese philosophy and anecdotal oral history stimulated my hunger to know the concept of Qi more thoroughly and personally. 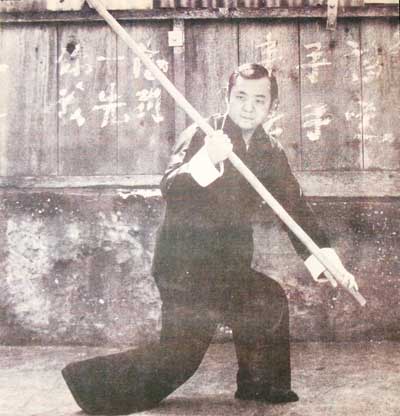 Many people are drawn to study Taiji for its refined martial arts techniques demonstrated with such principles as moving 10,000 pounds with a single ounce. The martial art of Taiji cannot be applied with muscle strength alone, but requires some understanding of Qi movement in one's own body and how it interacts with an opponent. While I could not help but enjoy the exquisite martial applications that Sifu Gene Chen taught, I have always been most interested in the incredible health benefits of practicing Taiji Quan, and the deeper implications of Qi in health and in the imbalance of disease.

Chinese philosophy has recognized for thousands of hears a clear and observable connection between the Mind-Spirit and Body, linked by the movement of Qi. The practice of Taiji Quan differs from other martial arts in its profound health promoting ability into old age. Although Sifu was devoted to the development and refinement of his martial skill, he consistently reminded us that the most important teaching is really to be a good person. This basic teaching emphasizes the necessity of mind training in Taiji Quan, and reminds us of the ultimate goal of health and kindness in our practice.

In keeping with this instruction, I have highlighted some of the basic principles that are relevant in both Push Hands and daily life. This information comes from a series of lectures given between 1999-2001 in Golden Gate Park, San Francisco supplemented by my studies in Chinese Medicine.

Different from most other martial arts, Taiji is soft, or Yin, meaning that although we use our muscles and there is strength, movement and contact are gentle, relaxed and smooth, moving in spirals and using our energy efficiently. In Taiji we recognize that we do not own empty space around us. We bring our focus within to our own centerline.

The most basic centerline of the body is made of the two primary channels that encircle the front (Ren channel) and back (Du channel) of the body. Defending our centerline instead of defending the space may sometimes mean moving out of the space we are in so that we may find a more advantageous position for ourselves in relation to the surrounding environment, in this case towards our opponent.

Sometimes when driving I notice how it is common to think we own the space in front of us and become irritated when someone moves in front of us, "cutting us off". A more Taiji approach would be to put ourselves in the best possible position, including in physical space and in attitude, according to others around us, therefore not becoming mentally and emotionally engaged and tense, but slowing down if necessary and remaining calm. 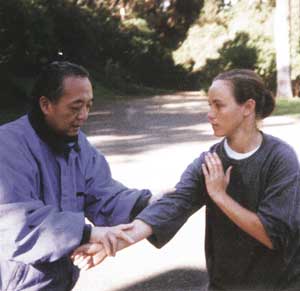 It could be argued that relaxation is the single most important principle in Taiji and Qigong, as well as for general health and physiological well being. Numerous modern studies indicate the severe impact of stress on health, causing inflammation in the body that can contribute to heart disease, high blood pressure, anxiety and general mood disorders.

In order to relax the body, we must first relax the mind. Relaxing the mind can be difficult because it often requires that we change our way of thinking and being on a deep level. Ideally this shift in perception does not happen occasionally, only when practicing pushing hands, but becomes a new way of engaging with the world every day as we approach each new situation with a relaxed and open mind. Only when we have relaxed the mind can we truly relax the body.

In the natural state of things Qi flows. One way of perceiving health and balance vs. disease and sickness is purely by looking at the flow of Qi, through a room, through a forest, through trees, through the body. Where Qi is stagnant and not flowing there is disharmony and often pain. Where it flows there is a harmonious state of constant transition and the body is free of pain. To move with the flow, this is Taiji, this is understanding the Dao. By understanding that stagnation, or lack of flow, creates problems, we look within (mentally, emotionally & physically) for where there is lack of flow or a sense of constriction.

One of the most common reasons for lack of flow is emotional states such as stress and fear. When there is Qi stagnation in the channels, downstream there is a lack of Qi, and just upstream there is an accumulation of sedentary Qi. This stagnant state of being creates disease and we experience pain more easily. Approaches such as Taiji, Qigong, Acupuncture and self-massage can all open the channels and promote the smooth circulation of Qi.

A common example of Qi stagnating and causing discomfort is when emotional upset such as anger or anxiety then causes a stomach ache or nausea. This condition in Chinese Medicine is known as the Liver overacting on the Middle Jiao (Spleen and Stomach). The Liver is in charge of the smooth flow of Qi, and is easily affected by anger and stress, causing the Qi to stagnate and affect the digestion.

Simply by training the mind to become aware of where and when there is a lack of flow, this alone can help promote the smooth harmonious circulation of Qi in turn improving one's Taiji and promoting good health.

The idea of Yin and Yang is a universal concept that can be used to look at all different levels of life including the mind, body, and world around us. It is a way of looking at individual parts, and at the same time recognizing the whole. Or in other words Yin Yang theory recognizes the Interdependent Nature of all things, that nothing exists in isolation, and any given thing or feature is a part of something larger. 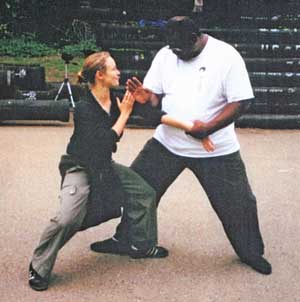 Yin and Yang can be described respectively as dark and light, feminine and masculine, soft and hard, substance and activity, earth and heaven. This concept also exists in cycles of time, such as seasonal cycles of the year, monthly cycles of the moon, and the daily cycle of night and day.

In both medicine and Taiji the main principles of Yin Yang Theory are as follows:

1. Opposition: Yin and Yang are opposite and contrasting one another

2. Interdependence: they mutually depend on and define each other

In the Yin time of Autumn and Winter the Qi moves deeper into the body, as some animals hibernate and the sap of trees runs deeply in the trunks to sustain life. In the Yang time of Spring and Summer the Qi moves more out to the surface of the body, flowers sprout from bulbs dormant under the earth, and barren trees grow new leaves. Living harmoniously within the cycles, we sleep longer in the winter, and less in the summer, we eat more stews and root vegetables in the autumn and winter and more fresh fruit and leafy greens in the spring and summer.

One of the key ideas of Yin Yang theory is that nothing can ever be 100% Yin or Yang. Everything is a combination, and that combination is never static and equal but constantly changing. Similarly, nothing is ever purely negative or positive. Within positive is the seed of negative and within negative is the seed of positive. There is always change between Yin and Yang. This constant changing dynamic balance is Taiji.

As beginners we must practice slowly to know where our center of gravity is. If we are relaxed, we can then know where our centerline is. Subsequently, we may observe our state of consciousness, our Yi (intention). There is a Chinese saying that 'the Intention leads the Qi' (You yi, you qi).

Chinese Medicine recognizes these areas as powerful tonic points to strengthen the whole body and constitution. By keeping this area full of Qi, soft and flexible, we may then create good stabilization, relaxation and groundedness, both mentally and physically.

These are some of the benefits I have enjoyed practicing Taijiquan. I am deeply grateful for Sifu Chen sharing his greatest passion in this world, Taijiquan.