Qi has many meanings in Chinese; the most common one is air. In the context of Taiji (T´ai Chi), it means the internal energy. Quan literally means a fist, when it is used after any name it becomes a martial art style. For example Taijiquan (the pinyin spelling for T´ai Chi); Bagua Quan and Xingyiquan, the later two are other famous internal martial styles.

This article will discuss Qi and Quan, their connections, and how to improve qi to enable your quan to reach a higher level.

Qi (in the context of martial arts) is the life energy inside a person. This life energy comes from the combination of three things: the air breathed in through the lungs, essential Qi from the kidney, and the Qi absorbed from food and water through the digestive system. Qi circulates throughout the body, performing many functions to maintain good health.

Like other internal martial art styles, Qi is the driving force of the internal power (jin) in Taiji. The mind (yi) directs the qi, and the qi drives the jin, in practice, yi, jin and qi are inseparable. I will discuss this later.

Qigong, the exercise of qi cultivation, is one of the oldest exercises in Chinese history. Its origin dates back more than one thousand years. There are numerous types of qigong; generally speaking it is a variety of breathing, gymnastic, and meditative exercises. 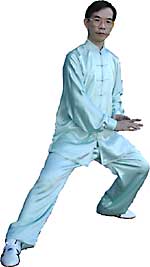 Qigong can be related to Daoism; Buddhism, Confucius, martial arts and other styles. In practical terms Qigong can be done sitting, standing or moving. There are hundreds and thousands of martial art styles in China, almost all of them have their own brand of Qigong. Generally speaking martial art style Qigong is moving, more practical and is part of the discipline. Although different styles place varying degrees of significance to its Qigong, internal styles place greater significance in Qigong. Most Taiji practitioners agree that Qigong is an integral part of Taijiquan.

Chinese culture, other martial arts, Buddhism and Confucius all have some influence in what Taiji is today, although it is well known that the Taiji Qigong derives from Dao Qigong. Taiji has also incorporated many Daoism´s philosophical understanding of nature into its forms.

Like other martial arts, Taiji Qigong is designed to serve the martial arts purpose. Because of this, cultivating Qi can be seen almost as background activity by some, especially comparing it to sitting meditative type of Qigong. This is not to say Qigong is not a vital part of Taiji, only it is almost hidden to untrained eyes. Unfortunately, some practitioners forget the Qi component in their forms.

Most Taiji styles incorporate a set of stationary Qigong, which usually involve standing and maintaining different postures for varying periods of time. Like sitting meditative Qigong, it allows you to concentrate better on the mind and the Qi without being distracted by moving and coordinating the whole body. On the other hand, Qi is dynamic (it circulates throughout the body) when practicing Qigong, being in a stationery position could create an imbalance between the inside and outside body. It is accepted by many that if practiced incorrectly, Qigong practitioners could be so wrong-tracked that they become mentally disturbed in a very profound manner (the literal translation of this term is: losing fire into the devil reign). People are known to become crazy when their minds thus wrong-tracked. It is considered to be the most dangerous risk of practicing Qigong. This imbalance is believed to be more likely to cause wrong tracking, whereas practicing moving Taiji Qigong has no such risk.

Quan is "fist" in Chinese, thus any name followed by Quan is a martial art style. Here I am going to use the word Quan to mean martial art. The ultimate purpose of Quan is to subdue or control your opponent. There are two types of Quan; the internal and external. Within either type there are many different styles. It is much harder to learn the internal Quan for effective self-defence. The external Quan uses techniques that are more natural to the body, stronger muscles, blocking and punching, where the quicker and stronger tend to win. Whereas in internal arts, one has to cultivate Qi (which may takes years to reach a good level), integrate it to the body so it can be directed by the mind (yi) and able to drive internal power (jin) before it can be effectively used for self-defense. In a way it is like most things that takes more time and patience to cultivate initially...it usually ends up more powerful and lasts longer. 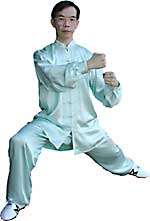 Strong Qi, not only makes one healthier, it improves the level of Quan. I am going to confine this to Taiji, and to two important concepts because it is impossible to cover such a vast subject here. These are the understanding of Opening and Closing, and the circulation of Qi.

Alternating opening and closing continuously is evident in any Taiji forms. Like drawing a bow to shoot an arrow, the drawing is storing energy that is opening. The shooting is releasing energy that is closing. This can be confusing because the opening and closing relate to the use of Jin, not necessarily relate the outward appearance. For example in the Yang style Single Whip movement, the end movement is a closing movement, not opening, although its outward appearance is that of opening up.

As in all Qigong, correct breathing is of vital importance. Breathing in while opening and breathing out while closing. Chen Jin (one of the most famous Chen style master whose writing was responsible for making Chen style known outside the Chen village) said when opening you are solid outside and soft inside and when closing you should be soft outside and solid inside. For example, in the Chen style 36 Form, Form 34 Forward Cannon Punch, bringing both fists backward and downward to near the left hip (see picture 1) is drawing the bow, then the punching with both fists (picture 2) is shooting the arrow. Breathe in while storing energy, your outside is solid and inside soft; then breathes out when punching out with the outside soft (and elastic) and inside solid (Qi sinks to the Dan Tian). When breathing in, Qi moves upwards and when breathing out, Qi sinks downward.

Opening and closing is often described as stretching out and relaxing. It is important to be aware that the muscles, ligaments and tendons can be stretching out even when moving closer to the body. When stretching out one must not over-stretched to the extent of becoming stiff, otherwise the Qi will stop its flow. The converse is true in that when relaxing, one must not collapse the muscles, ligaments and tendons; there should be a certain amount of ward off force (peng jin) remaining otherwise Qi collapses and the flow stops too.

Picture 4: At the out breath, Qi sinks down to the Dan Tian. From the Dan Tian it moves up along the Governing vessel on the in breath, and then comes down along the Conception vessel to move in a circle.

Opening and Closing, breathe in and out in alternative pattern is the law of nature. All martial art styles follow this alternative pattern, although external styles tend to break the force, thus create a weakness. Taiji uses circular movement to facilitate the circulation of qi, make the changing of energy smooth and continuous without a break. The internal energy become stronger as it flows continuously gathering more qi. This is better illustrated by the concept of qi circulation.

The natural Qi from birth deteriorates as we grow older, qi circulates and disburses over one´s head, chest or coccyx. So we continue to loose qi as we grow. Qigong and Taiji help to retain and cultivate Qi. To many people Taiji´s goal is: "to live forever and to stay forever young", the key is qi cultivation. To do this one needs to learn to be aware of qi, and to direct it circulation consciously so that it can be retained and enhanced.

Once one understands the opening and closing, the next stage is to move qi upwards as you open or breath in along the Conception vessel (a meridian or a Qi channel along the midline at the front of the body). The breathing should be done with mouth gently closed, tongue lightly touching the upper palate, taking the qi to the middle of the chest (at the acupuncture point of Shan Zhong, see picture 4) and definitely not higher than the throat, otherwise you will over strained and hinder the flow of Qi.

Picture 3: Breathing should be done with mouth gently closed, tongue lightly touching the upper palate, taking the Qi to the middle of the chest (at the acupoint of "Shan Zhong")

As you breathe out, bring your qi down to Dan Tian that is an area three-finger breadth below the belly button. You must take care to understanding which movement is opening and which is closing. At the beginning confine your practice to the forms that you are sure of which part being opening and closing. You must avoid forcing your breathing, if you run out of breath or are not sure which way to go, then you should allow yourself to breath naturally. Usually when the body posture and the movement are correctly, the breathing will become correct naturally.

After a suitable period you can circulate the qi in the above manner (this may take a long time). It depends on your health, talent, frequency of practise... etc. Usually when your forms are well balanced, the flow of movement is even and strong, your postures being correct you will start feeling the abundance of qi in the Dan Tian.

You can then start working on circulating Qi. As you breathe in, feel Qi flowing along the governing vessel (another meridian at the midline of back of the body) just underneath the skin and raises up to the scalp. At the out breathe Qi sinks down to the Dan Tian, from the Dan Tian it move up along the Governing vessel on the in breathe, and then comes down along the Conception vessel to moves in a circle. (see picture 3)

At this stage it may be difficult to reach without guidance of a good teacher and a lot of practice. There is a next stage when your Qi can be directed at will from Dan Tian, this is a difficult stage, best to be taught by teachers at a face to face setting.

The Author: Dr Paul Lam studies Taiji with Professors Men Hui Feng and Kan Gui Xiang of Beijing University of Physical Education for many years. He is a respected teacher, author and family physician. Dr Lam has created the Tai Chi for Arthritis program and conducts regular workshops in USA and Canada.