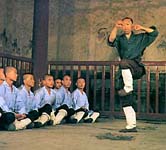 The origins of the Shaolin temple is somewhat confusing and controversial. Most believe that the temple was built by a Buddhist monk from India named "BaTuo" around 495CE in the 19th year of the reign of Emperor XiaoWen. It was built on a piece of land that had been recently burned near Shaoshi Mountain in Henan Province, and the builders planted many new trees, hence the name Shaolin ("Shao" meaning "young" or "new", and "Lin" meaning "forest".

It seems as though BaTuo was fond of the martial arts which was being practiced in the region, and two of his disciples became quite proficient at the local art, teaching it to some of the other monks in the temple. (Historical Time Line).

The centralized location of the temple in Henan Province made it a resting spot for travellers and many martial arts experts stayed for short periods of time, sharing many of their techniques with the monks. The temple was also a tolerant haven for opposition military leaders being pursued by local armies, so many of these leaders spent extended periods of time at the temple, sharing their techniques as well. Buddhism was being supported by the Emperors and was receiving many gifts, both of land and gold. For instance, it is recorded that Emperor Wen Di gave Shaolin over 1600 acres of land during the Sui Dynasty. This rapid growth and wealth made the Shaolin a target for bandits and foreign pirates, thus the Shaolin monk fighters were trained to help protect their assets. It is still a question how the peaceful and benevalent Buddhist monks justified the study of martial arts to such an extent... but the tradition continued and became one of the truely amazing stories of ancient China. 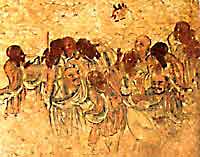 The martial art routines of the Shaolin Temple were not organized into a complete system until some 30-40 years later when another Indian monk visited the site. This monk's name was Bodhidharma (DaMo in Chinese), and his entry brought a new type of Buddhism to China, that of Chan ("Zen" in Japanese) Buddhism. Chan Buddhism was less strict and adopted more of the existing Chinese beliefs, making it more palletable to the Chinese people. The Chan sect spread rapidly within China and is the most predominate form of Buddhism (Zen) in the modern world.

The story is told that Bodhidharma visited the Shaolin temple and was refused admittance. He retired to a cave and sat, meditating and staring at a wall for nine years, contemplating his beliefs... enough time to have a shadow of his image permanently discolored into a facing wall (now a tourist attraction). When the Shaolin monks heard of this amazing dedication, they admitted him into the temple, thus making the Shaolin Temple the primary "Zen" or "Chan" temple in China.

Along with these new Chan-style Buddhist teachings, the martial training of the monks was systematically developed into a standardized system of martial arts known as Shaolin WuShu (Gongfu).

Although this martial art was being developed in the temple in Henan Province, Shaolin WuShu or boxing was still unknown throughout China. The monks were not necessarily bragging about this new ability to protect themselves. So, we can give credit to publishers for spreading the word. The earliest reference to "DaMo" or Bodhidharma as the originator of this new fighting method called Shaolin Boxing was in a widely popular novel, "The Travels of Lao Ts'an", first published in "Illustrated Fiction Magazine" between 1904-1907. This was followed by a book called "Shaolin School Methods", in a Shanghai newspaper in 1910. Then, another book entitled "Secrets of Shaolin Boxing" was so popular that 30 reprints flooded the market by 1919. These, and numerous books and movies to follow was the reason that the Shaolin Wushu style became so popular throughout the world.

Here in the United States, we have Bruce Lee, who died in 1973, and the very popular "Kung-Fu" TV series that premiered in 1972 to thank for spreading the popularity of the Shaolin Boxing methods to more than just the martial arts enthusiasts. Although most Americans would not know what Shaolin style is if they saw it, they recognize the term and know that it has something to do with a superior fighting style. 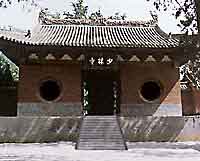 The Chan Buddhist philosophy that started the Shaolin sect continued to evolve and adapt, absorbing many of the beliefs of visitors to the temple. It adopted many of the Taoist (Daoist) principles of the time, thus making Shaolin a unique sect of its own that was basically an amalgamation of many of the popular beliefs, with a strong emphasis on its highly developed martial art system.

Repeated attacks from leaders who feared the power of the monks, and long periods of inactivity when leaders did not always agree with the philosophies of the Shaolin, caused some monks to leave the temple and travel to other areas of China. These monks would sometimes teach their philosophy and their martial skills at other temples, thus recruiting them into the powerful fold of the Shaolin in Henan.

Temples in Wu-Tang and O Mei Shan were converted to the Shaolin beliefs, and new temples were constructed in Fukien and Kwangtung, making a total of Five powerful strongholds of philosophical and martial training within China.

The End of an Era

The beginning of the end for the powerful Shaolin was the Boxer rebellion in 1901. This was a time in China when Western and Japanese governments controlled most of the business interests of China.

China was divided into zones or regions, each controlled by one of the foreign powers. These conditions, coupled with the almost universal dislike by the Chinese for their Empress at that time, created a Nationalist movement with grass-roots support. The leaders of this new movement were the legendary and famous martial artists, many Shaolin. They were known as the "Boxers", and they believed that their martial arts skill was superior to that of the guns and advanced weapons of their foreign opponents. Despite their skill, they were easily defeated, with many being killed.

Following the rebellion, the country was in chaos and regional warlords were fighting each other for control of regions as well as partnering together to expell the foreign powers. During this time, the Shaolin and other monks were routinely murdered by soldiers on both the Chinese and the foreign sides. This caused a mass exodus of monks into the hillsides, as they feared the destruction of their temples. By fleeing into the mountains, they felt that at least their knowledge would survive.

As expected, all of the the abandoned temples were looted and destroyed. The O Mei Shan Temple in Szechuan was used as an artillery practice site by Chinese officers, then was shelled by Nationalist and by Communist armies in turn.