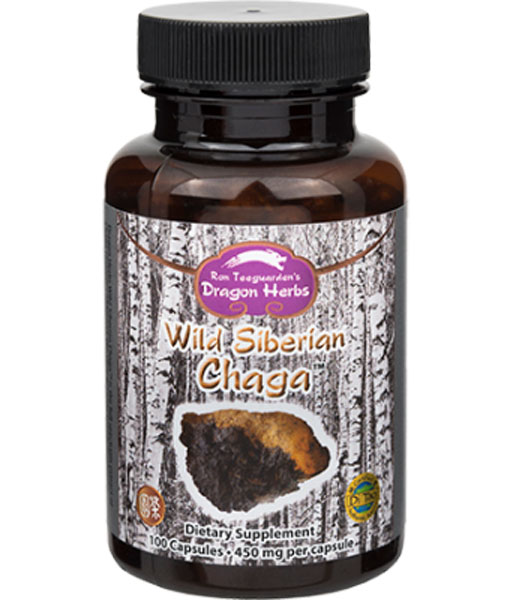 Chaga (Inonotus obliquus) is a highly prized tonic fungus (mushroom), long used in traditional Siberian, Korean, Chinese, North European and Scandinavian herbalism. It is found growing wild in old forests throughout the colder regions of Northern Asia, Northern Europe and North America. The best Chaga is believed to come from subarctic birch forests in Siberia. Dragon Herbs premium Wild Siberian Chaga is collected from remote near-arctic Siberian forests. In Russia, after ten to fifteen years of parasitism on birch trunks, the black shapeless overgrowth of fungus acquires the status of “Chaga.” At 20 years Chaga is considered herbally fully mature. The vast majority of “Chaga” used to make formulations sold in the United States use “Chaga” that has not achieved maturity, and is therefore not truly “Chaga.” In fact, there are “Chaga” farms in tropical countries such as Myanmar that produce “Chaga” in just 3 or 4 years, but this “Chaga” is not even close to the potency of Siberian Chaga that has reached full maturity after 20 years of wild arctic growth.

Why Siberian Chaga? Like ALL major tonic herbs, the source of the raw material (the herb) should be selected based on both tradition and modern chemical analysis to assure the best product. Dragon Herbs is a Di Tao company, meaning we use only raw materials from the authentic source to make our herbal products. The source of the raw material for Dragon Herbs Wild Siberian Chaga is a remote region of Siberia in northern Russia. Chaga grows in many places, but chemical analysis has definitively demonstrated that genuine wild Siberian Chaga is the most potent form of Chaga. Wild Siberian Chaga has special properties that must be sensitively extracted. Siberian Chaga has hundreds of active constituents that must be protected and delivered to your digestive system intact and undamaged.
Chaga has traditionally been consumed as a hot tea, and the benefits associated with Chaga are based primarily (almost exclusively) on the cooked decoction or extract of Chaga. So mild cooking is traditionally considered appropriate for Chaga. Cooking produces additional metabolites that are believed to provide biological activity.

Dragon Herbs Wild Siberian Chaga is a concentrated extract, produced by a state-of-the-art moderate-temperature full-spectrum extraction technology. Special highly sensitive technologies were used during the extraction process to assure full extraction of bioactive components. Both water and ethanol (alcohol) are used in the extraction, and as a result, all bioactive components are present. The ethanol and water extracts, both independently and together, revealed “remarkable potential for scavenging” free radicals, while Chaga extracts made with synthetic solvents did not show this activity.