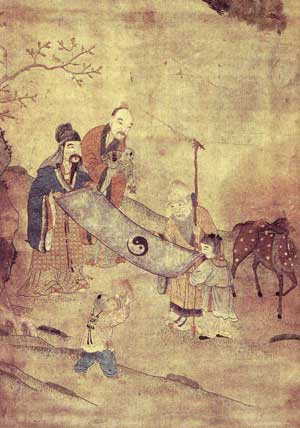 17th century painting. "Unveiling the Scroll of Yin and Yang."

The observed low prevalence of obesity in Chinese American participants indicates that high rates of obesity should not be considered inevitable. These findings may be viewed as indicators of potential future increases in vascular disease burden and health care costs associated with the obesity epidemic.

In ancient times there were Chinese who studied the heavens and the earth seeking answers for the mysteries of existence. Such things as the orderly rising and setting of sun, moon and stars, and the continuing succession of the four seasons suggested a order of universal regulation. So profound was this ultimate principle there seemed no way to properly describe and define it with words. Nevertheless a name was chosen—a term useful for both spiritual and scientific exploration. It was called "Tao" ("Dao" in pinyin),
(돛) meaning "Path" or "Way."

The Tao produces the infinite One.
The One gives birth to the duality of Two.
From Two comes forth . . .
The Trinity, from which arise All Things.
All Things carry Yin, the Feminine Principle,
All Things embrace Yang, the Masculine Principle.
Their pulsing Life Force (Qi) unites; and Yin and Yang are in Harmony.

The simplest literal meaning of Yin (綾) is "in the shade." The simplest literal meaning of Yang (捺) is "sunlight." They are the opposite continually interacting polarities that appear in the Tao. Passive, cold, feminine, negative are all yin qualities. Aggressive, hot, masculine, positive are all yang qualities. There needs to be a proper balance between them; if either yin or yang is in excess or deficient, the harmony of the Tao—and its attendant physical wellbeing—may be lost.

A simple definition of Qi is "air" or "breath" The traditional form of the word is 氣—which is made up of (폭) vapor or steam rising up from rice (쵠). For our purposes of wellbeing and weight-loss we have nutritional life force arising from cooking rice—and by extension, Qi arising from any food being digested in the abdomen.

Qi understood as being Life Force is in itself neither good or bad. But if it leads to disharmony and diseases such as obesity, Qi may be conceived as being spoiled or defective. An analogy would be that water (like Qi) is necessary for life, but if it is full of sewerage it can make you sick, or even kill you. Traditional Chinese science called such improper energy xié qì (逵氣) as in "unhealthy," "disease causing" or "Evil."

What Happened? How Did We Get So Fat?

Our food desires come from a time over 10,000 years ago when we were hunter-gatherers. Then the diet was fresh killed meat (primarily yang), and hand picked fruits (primarily yin) and vegetables (primarily balanced in yin-yang). Hunting animals and gathering vegetation was physically demanding. Eating large quantities of fresh killed meat and sweet fruit was a remedy for the times when famine struck. Our bodies still carry this latent urge to eat as much yang meat and yin sweets as possible It is no wonder beef and sugar are such popular items in contemporary American diet.

About 10,000 years ago people began cultivating grains, which by their nature are neither extreme in yin or yang. Then diets were mainly rice, barley, oats or wheat, along with vegetables, local seasonal fruits, and occasional small portions of meat. Whole grains by their very nature bring a state of balance to yang-meat and yin-sweets. Good food was eaten in moderation and there was no significant obesity. Similarly, in the 21st century you will find no obesity problems in the so-called Third World people who continue to eat in this manner of small portions of predominately whole grains, vegetables, fruits, and occasional fish and meat. With this balance of yin and yang you have wellbeing.

The problem is that much of the factory produced and engineered food of the supermarkets and chain restaurants has "evil" Qi in it. We can eat occasional small amounts of such food with no significant problems. (One Big Mac is not going to send you to the hospital.) But modern mass processed food has been constructed to trigger over-indulgence, which paradoxically causes us to eat even more because we really are craving "good" Qi and not getting it.

We should eat foods that have the best (healthiest) Qi. To do this "read the Qi" of the food before you buy it. If possible touch fruits and vegetables to sense the condition and strength of the Qi. Look for deep rich colors, as well as pleasant smells. Berries should be plump and dry and have a sweet aroma. Tomatoes should feel slightly soft, smell sweet, and have a vibrant color. If the qi-life force isn't right—or has been disguised by artificial colors or flavors—don't buy it.

In Chinese traditional thought the interplay between yin, yang, and Qi creates elemental patterns of Five. For our purposes the best fruits and vegetables come in five colors. What follows is recommended both by western nutritional science and Taoist wisdom. To obtain an inner and outer balance—and your proper weight—eat from these five color groups every day.

Also important white foods are oats, barley, cauliflower, and lean white chicken. Also fish such as cod or halibut. But interestingly the best rice is not white processed, in fact the darker the color of wholegrain rice the better—red and purple rice is best. And remember to stay away from white flour as in white bread, bagels, and pastries.

It is harder to read the Qi of packaged meats. But you still can judge the quality of the meat—or any other food—by its effect on you and your Qi: you should no longer be hungry, and you should sense that you inner Qi has been strengthened. But if your inner Qi balance is upset then don't eat it. It has "Evil Qi."

For example. if you eat a large portion of American food industry produced beef—with its attendant hormones, antibiotics, non-range free, feed with genetically modified corn and cooked with monosodium glutamate (MSG) your active Qi flow most likely will be reduced and you will get sleepy, or feel sluggish. You'll want to take a nap.

However, if you have a cold (a too yin disease) the best medicine is a bowl of hot chicken soup (nicely yang).

Always be aware of the Qi of what you put in you and what it does to you, and act accordingly.

EXCESSIVE YIN—eat as little of these as possible:

EXCESSIVE YANG—eat as little of these as possible:

How to Lose Weight

Most naturally occurring foods fall into a Normal range of yin and yang. For our purposes of weight loss they are the foods to eat in moderation.

There is no one best diet for all people. Even the same person needs more yin foods in hot weather and more yang foods in cold weather. Also people with yin metabolism should eat less fruit and more meat; people with yang metabolism should eat more fruits and less meat. Using stereotypical characterizations: a ruddy-faced, irritable aggressive person with high blood pressure is relatively yang; they need more fruits and veggies. An anemic, melancholy introverted person is relatively yin; they should benefit from eating organic red meat.

Always check with your medical/nutritional professional to learn how much you should weigh and what specials foods (and herbs) you need to eat or avoid.

[fyi: Experts often disagree if a certain food is yin or yang because many foods can be both yin OR yang. For example pork: some experts call it yin, others yang—this discrepancy in description is caused by such things as the sex of the animal—meat from a female pig is more yin than from a male pig. And the way the meat cooked—smoked and fried bacon is extremely yang. But boiled pig meat served cold and without hot spices is moderately yin] (see figure 1 below).

Feasting on Qi: The Meditation

The following technique to reduce and eliminate hunger is drawn from esoteric Taoist and Hindu pranayama practices. Although relatively simple to do, this technique alters inner Qi flow and very possibly can get you "Qi intoxicated"—as in feeling "spacey," "stoned," or "high." So never do it when driving, or in any other activity where an accident might happen.

We eat for Qi. But air also gives us Qi and so when we feel hungry we can replace food with air. Breathe in deeply and imagine that you are filling your stomach and intestines with air-qi. Then squeeze in your abdominal muscles as you tighten your anus and the muscles of the perineum—do this gently and do not force. Hold for about five seconds then exhale. Do for three to five times. If you get dizzy stop at once! Try this before each meal, and add it to any daily meditation practice.

The author teaches Qigong in the Boston area. He may be reached at This email address is being protected from spambots. You need JavaScript enabled to view it.. His first article "Qigong for Weight Loss" appeared in Qi Journal, spring 2009.