The Old Summer Palace, known in China as the "Gardens of Perfect Brightness" (pinyin: Yuánmíng Yuán), was a complex of palaces and gardens northwest of the walls of the Imperial City in Beijing, built in the 18th and early 19th century, where the emperors of the Qing Dynasty resided and handled government affairs (the Forbidden City was used for formal ceremonies). 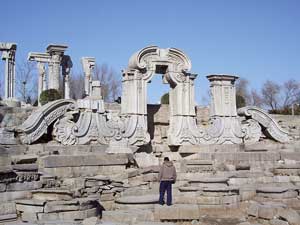 Known for its extensive collection of garden and building architectures and other works of art (a popular name in China was the "Garden of Gardens" ), the Imperial Gardens were looted and burned by British and French troops in 1860, as a punishment for the torture and execution of those countries' peace emissaries by the Chinese Emperor.

Only the European-style palaces survived the fire since, because unlike the Chinese-style structures, they were made of stone. A few ruined stones of these European buildings still stand on the site today; this has misled some visitors to believe wrongly that the Old Summer Palace was made up only of European-style buildings.

Classical Chinese gardens are a special aspect of traditional Chinese culture and art. A Chinese garden mixes man-made landscape with natural scenery, architecture;, painting, literature, calligraphy, and horticulture. The classical Chinese garden originated in the Shang and Zhou dynasties, when monarchs began to build parks for their own leisure and pleasure. The construction of gardens became something of a fashion during the Spring and Autumn and Warring States periods, and by the Qin and Han dynasties the Chinese had already learned how to imitate nature in their gardens, and private gardens had appeared. Chinese garden culture matured as a comprehensive school of its own during the Qing Dynasty and rose to become one of three garden-construction schools along with Western Asia and Europe.

Chinese gardens fall into four basic categories: imperial gardens, private gardens, monastic gardens, and gardens in scenic areas. Famous monastic gardens including the Jinci Temple of Shanxi and the Tanzhe Temple of Beijing; whereas the West Lake of Hangzhou and the Darning Lake of Jinan belong to scenic gardens.