The Chinese language term '祖窍' was translated into English by Charles Luk (1898-1978) as 'Ancestral Cavity'. 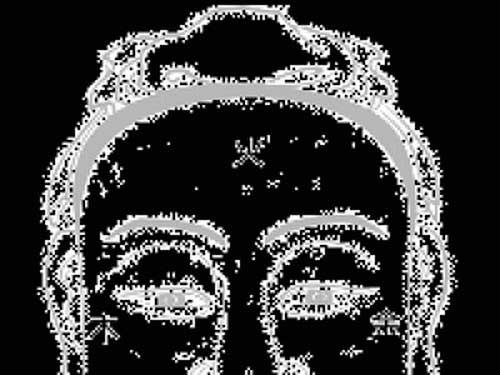 Taken together, these ideograms form the concept of the 'ancestral cavity'. Within Daoist (Taoist) self-cultivation, this is a specific point (located between and behind the eyes) that serves as the cavity of a profound and ancient knowledge. This wisdom is accessed through an effort of introspection, or meditation, and as such the zu qiao cannot be defined as either a psychological construct (as it has a presumed physical location), or a physical construct (because it cannot be seen with ordinary perception and must be accessed solely through advanced meditative practice). This means that the ancestral cavity both exists and does not exist simultaneously, and cannot be limited to either interpretation or perspective. In the early stages of Daoist self-cultivation, the ancestral cavity only appears to exist when concentrative effort is established in the mind of the practitioner, and directed toward this psycho-physical point. In the advanced states, the ancestral cavity may be entered and left at will (in other words, it is now known to definitely exist), until the realization of Immortality, where the duality of entering and leaving the ancestral cavity is transcended forever. Needless to say, the ancestral cavity is considered the doorway to a higher being within Daoism, and is synonymous with a number of other Daoist concepts. A contemporary Chinese language encyclopaedia entry explains the zu qiao as follows:

The ancestral cavity (and its location), was described by Daoist Immortal Lu Dong Bin (吕洞宾), but he referred to it as the '天心' (Tian Xin), or 'Divine-sky Mind', according to the Sichuan Science Technology Publishing Society. In 1995, it published Feng Guang Hong's (冯广弘) book entitled 'Modern Interpretation of the Grand Unity Golden Flower Realization' (known in English as the 'Secret of the Golden Flower'). This book equates the ancestral cavity with the divine-sky mind, and describes it as being located in the centre between the eyebrows, is triangular in shape and is about two inches behind the eyes. The book states 'It is not located within the body, and it is not located outside of the body. Ordinary inquisitiveness cannot open it, and it can only be discovered through 'stilling' and 'calming' the mind.' Some people say that the ancestral cavity is located two inches behind the center of the nasal structure, but this is obviously incorrect.

The ability to 'intentionally observe the ancestral cavity', and thereby realize its presence and function, is termed the correct following of the return of the light law. Both eyes perceive a bright light – which only manifests in the ancestral cavity. This state of mind-body oneness can only be observed when the mind is 'stilled' of all obscuring thoughts, and a state of 'calmness' is established. Therefore the preparing of the mind through appropriate training is essential, and this can only happen if the teachings of the ancestors are followed exactly. This is spirit (shen) and the human body becoming one, and because of this, spirit is recognized as the ancestor. According to the 'Modern Interpretation of the Grand Unity Golden Flower Realization', it states that the correct application of the returning light law, is to focus the awareness on the triangular area between the eyes, so that essential nature (jing), and spirit (shen) are focused and integrated at that spot – which is the ancestral cavity. The above book states 'True intention refines and circulates the qi energy – like polishing a mirror – so that three lights meet between the eyebrows. A bright light like that of midday now radiates from the mind. It is only true intention that can purify the mind and guide the energy in this way.'' (See sidebar)

This has a Buddhist parallel in that the Buddha defined his philosophy as 'namarupa', or 'mind-body'. By this he meant neither 'materialist', nor 'idealist', but rather some kind of unidentifiable reality that due to the limitation of ordinary human thought and language, remains undefinable, but which is some type of combination of the material and the psychological. The Daoist zu qiao concept evolved over thousands of years of human observation of the body and mind, and maybe considered the product of an ancient Chinese science. It is not a myth, or a product of inverted or false thinking. In fact, the notion of the ancestral cavity is an early Daoist attempt to acknowledge and explain that reality cannot be limited to physical appearance or psychological projection, but is rather a difficult to comprehend combination of the two. It is only human ignorance that cannot see this, but once self-cultivation has been successfully applied to the mind and body of the aspirant, the reality that is reached through the zu qiao becomes obvious and self-evident. As experience defines reality, only those who have realize the zu qiao truly understand its implications. It is not physical, but neither is it psychological, and yet the material and mental aspects cannot be extracted from it. This is because reality is an integration of matter and thought, and that the unenlightened habit of human-beings separating the reality they live in into 'matter' and 'mind' is too simplistic for advanced Daoist science.

The zu qiao is entered through an act of concentration and focus of the mind, but the mind can only be quietened when the body is suitably disciplined. It is the act of focusing all the energies between the eyes that both creates and opens the portal that is the ancestral cavity. Although the ancestral cavity is difficult to discern, and despite the fact that it takes much training to perceive, nevertheless, it is also an expedient that acts as a doorway to a higher perspective. Passing through this 'mysterious gate' (玄门 – Xuan Men) is like experiencing a holographic universe, or rather realizing that the universe is both 'real' and 'unreal' at the same time, but with no contradiction whatsoever. This ancient Daoist wisdom also has parallels with modern science, particularly Quantum Theory, and maybe favorably compared with Schrodinger's Cat. The behavior of sub-atomic particles appear to be unpredictable so that nothing in the universe is certain (see Heisenberg). A subatomic particle, according to Quantum Nonlocality Theory, appears to come into and out of existence so that measurement at this micro level is very difficult or impossible to predict or influence. Schrodinger devised a simple thought experiment to explain this reality. He stated that reality is like a cat in a closed box. Due to the unpredictability of reality, when the observer opens the box, there is always a 50-50 chance that the cat is either dead or alive, but this equally holds for the cat in the box even if it is not being looked at. The point is that reality cannot be limited to a set of 'either-or' presumptions, but has to be premised upon a theory of totality, oneness, and all-encompassing opportunity. The zu qiao is a psycho-physical reality that cannot be limited to a psycho-physical reality. It is like a mirror that not only reflects its own presence, but also folds-in on itself in such a manner that creates the conditions for the perception of three-dimensional space. In this sense, the zu qiao is the centre of the universe because it has no dualistic notions of its own locality. It is a collective 'zu qiao' that gets everyone who perceives it, beyond the barrier of limited materiality, and false imaginations."

Adrian Chan-Wyles is an independent scholar (and published author) living in the UK. He is the custodian of The Richard Hunn Association for Ch'an Study, and has written for The Middle Way—the journal of the Buddhist Society, London. ©2015. Adrian Chan-Wyles (ShiDaDao).