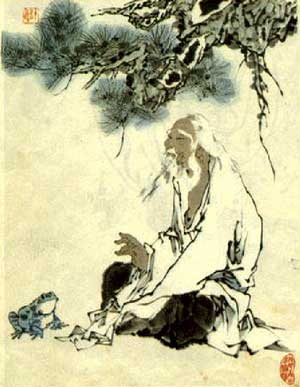 To students of Daoism, Zhuangzi's Butterfly Dream is perhaps the best parable and has been the topic of philosophical discussions for centuries.

The story has been quoted to explain the relationship between the waking state and the dream or illusion state, and it has been used to explain how enlightenment is like waking up after a metamorphosis. Are people who experience sudden enlightenment simply dreaming or awakening? Is there a difference?

Zhuangzi (Chuang-Tze) lived in the 4th century BC and was renowned for his brilliant wordplay and use of parables to convey messages. He was a follower of Laozi's (Lao Tze) writings and his critiques of Confucian society and historical figures are humorous and at times ironic. It is believed he was a contemporary to the Confucian scholar Mencius.

Zhuangzi espoused a holistic philosophy of life, encouraging disengagement from the artificialities of socialization, and cultivation of our natural "ancestral" potencies and skills, in order to live a simple and natural, but full and flourishing life.

Zhuangzi argued that life is limited and knowledge to be gained is unlimited. To use the limited to pursue the unlimited, he said, was foolish. He was critical of the way people categorized things and noted the different modes of understanding between creatures, cultures and philosophical schools.

In the fourth section of "The Great Happiness" ( zhìlè, chapter 18), Zhuangzi expresses pity to a skull he sees lying at the side of the road. Zhuangzi laments that the skull is now dead, but the skull retorts, "How do you know it's bad to be dead?"

Zhuangzi is credited as the author of a work bearing his name, the Zhuangzi. This work consists of 33 chapters, divided into 3 sections, the "Inner Chapters", "Outer Chapters", and the "Mixed Chapters".