His name is Jiu and his surname is Cao. He was born in the Sung dynasty, son of a military commander and was an uncle of the emperor. Fearing that he might be involved in trouble caused by his brother's ill behavior, he went to the mountains to learn the doctrines of Daoism. Afterwards, led by Hang Zhong Li and Lu Dong Bin, he joined the society of the celestial beings. He wears an official court headdress and carries a pair of castanets as his trademark symbol. He is considered the "patron saint" of the theatre. 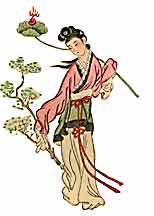 She was a native of Guangzhou (Canton) in the Tang dynasty, where she lived near the Yun Mu River. When she was fourteen to fifteen years old, she became a celestial being as a result of taking the Daoist medicine of mother-of-pearl powder. She disappeared one day when on her way to the court of the Empress Wu (AD 690-705) who had sent for her. She was revered for the long distances she travelled to pick dainty bamboo shoots for her mother who as very ill. Some say that she was a Daoist Nun during the Sung dynasty. Literates and officials often make inquiries of her on their future and destiny. She carries a lotus flower or seed pod as her trademark.

His name was first mentioned in Shen Fen's "The Celestial Being's Biographies, The Sequel" of the Tang dynasty. He often wears worn-out clothing. He usually holds a bamboo clapper and acts as though he is a common begger. For a living, he often begs for handouts in the busiest areas of the town, singing loudly while as if intoxicated. He was considered "semi-crazed by many. He travels far and wide with great ease. His trademark is a bamboo basket as he is considered the "patron saint" of gardeners.

It is said that Han Xiang Zi was a nephew of Han Yu. He has a bright and unrestrained disposition. He was carried by his teacher and master to the magic peach tree, where grew the immortal peaches... there an accident occurred (he fell from the branches), and he became an immortal. Once, in early winter, he made the peony flowers blossom in different colors, all within a few days...and inside each of the blossoms was a small poem. His uncle Han Yu was amazed and surprised at this skill level. He is usually pictured carrying a flute and is considered the "patron saint" of musicians. 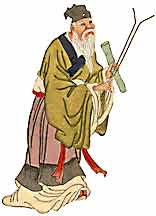 Zhang Guo Lao lives in seclusion on mount Zhong Tiao. During the Tang Dynasty, he was already reported to be over 200 hundred years old. Once, Empress Wu Zhe Tiang dispatched officers to call upon him and bring him back for questioning, but he pretended to be dead...afterwards, some people met him walking around Mount Heng. He was invited by Xuan Zong, the Emperor of the Tang Dynasty, to demonstrate his magic arts (he was a famous magician of the 7th and 8th centuries). He typically is pictured riding a white donkey with his back forward. The donkey is capable of running thousands of miles each day. According to lengend, when he needs to rest, he folds up the white donkey and hides it in a small box. He usually carries a musicial instrument, a bamboo tube beaten by two rods which are carries inside the tube.

Also called Lu Yan (Chun Yang Zi is another alias). He was a native of Zhong Fu during the Tang Dynasty. When he was young, he tried twice but could not pass the highest imperial examination. When he was sixty-four years old, he met Han Zhong Li, who gave him a lesson in the magic arts. He now lives in Mount Zhong Lan to cultivate himself according to the religious doctrines of Daoism. He named himself Hui Dao Ren. It is said that he once beheaded a flood dragon. He often plays with a crane in Yue Yang City, and drinks copious amounts of wine. He was granted a magic sword as a reward for overcoming ten temptations. This sword is his trademark and he is usually pictured with it and uses it to combat various evils on earth.

Zhong Li is his last name and Quan is his first name. Tie Guai Li helped him learn the religious doctrine of Daoism in the mountains. After finishing his Daoist studies, he went back to the earthly society. He beheaded a tiger with a flying sword and touched a stone and turned it into gold... giving the wealth to the poor. He left the earth for the heaven with his brother. He also helped Lu Dong Bin achieve immortal status. It is said that he lived several hundred yuears before the Christian eara, and is said to be able to revive the souls of the dead with his magic fan, which is his trademark.

According to legends, his original name is Li Xuang. He met Tai Shang Lao Jun and became a celestrial being. Legends state that he was a personal friend of Lao Tzu, the famous philosopher. When his spirit went adventuring, his body was left in the care of a disciple. On one occasion, the disciple was called away, and when Tie Gwai Li returned, his body had disappeared. He then took possession of the body of a dying beggar, and in such, is always portrayed supported by a crutch and a pilgrim's gourd as his trademark items. He is lame, so he sprinkles water on a bamboo cane and turns it into a iron walking stick. He is also called Tei Guai Li because his surname is connected with "Tie Guai" which means "iron walking stick". 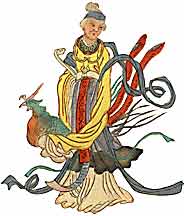 Also named Xi Wang Mu, Jing Mu, or Xi Lao. According to the "Biography of Emperor Mu Tien Zi", she is a fair and gentle elderly woman with a gift of singing. But according to the "Biography of Emperor Han Mu Ti:", she is about thirty-years old and an exceedingly beautiful goddess. She bestowed the flat peaches, which blossom once every three thousand years, on Emperor Han Wu Ti. When the flat peaches bear fruits, she always entertains the celestial beings with them in celebration of her birthday.

In Chinese, "Shou Xin" means "Star of Longevity". He is both an immortal and a powerful symbol of long life. His portrait is often displayed during one's birthday for good luck. He is perhaps the most recognized of the immortals because his likeness is used for so many purposes. You can find statues of him and his wife in gift stores around the world and pictures of him appear on posters, gift wrapping, and gift cards.