In the history of the art of the Chinese empire, jade has had a special significance, comparable with that of gold and diamonds in the West. Jade was used for the finest objects and cult figures, and for grave furnishings for high-ranking members of the imperial family.

Jade has been cherished for thousands of years. It's considered pure and enduring enough to inspire the wearer's highest spiritual aspirations, yet sensuous and luxurious enough to satisfy down-to-earth cravings. Green and white are the most popular colors of jade, but it also is available in orange, yellow, lavender, and black.

Many Chinese believe that jade will protect them and give good health. Jade also holds a deep symbolic meaning, conveying beauty, protection, power, and immortality. It is said that a man who treasures jade means he is a man of virtue (君子) and respects gods and ancestors. 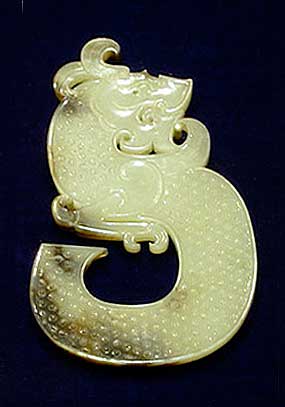 A popular Chinese saying is "Gold has a value; jade is invaluable." Because jade stands for beauty, grace and purity, it has been used in many Chinese idioms or phrases to denote beautiful things or people, such as Yu Jie Bing Qing (pure and noble), Ting Ting Yu Li (fair, slim and graceful) and Yu Nu (beautiful girl). The Chinese character Yu is often used in Chinese names.

The Chinese character 玉 (Yu) is used to denote the several types of stone known in English as "jade" such as jadeite (硬玉, 'hard jade') and nephrite (軟玉, 'soft jade').

In China, jadeite is now more popular and expensive than the softer type, nephrite. The first jadeite reached China from Burma (now known as Myanmar) in the late 1700s, and late eighteenth and early nineteenth century carvers created masterpieces that are still unsurpassed in concept, design, and technical execution. Jadeite's three most important qualities, in order of their impact on its market value, are color, transparency, and texture.

If shopping for expensive jade articles, one must be wary and perhaps take the article to a credible gemologist. Fake jade articles can be easily produced from hard plastic, glass, or various kinds of minerals, such as quartz or serpentine. Many mineral species look like nephrite and jadeite to an untrained eye. Inferior quality jade can be chemically modified or stained, which makes it worth less than natural, untreated jade.

High quality jade's value is equal to the most rare diamonds. Out of the top ten most expensive jewels sold worldwide by Christie's in 1999, five out of ten were jadeite, including three of the top four. But to some Chinese, jade is invaluable due to it's cultural significance.