Western fast food is flourishing in China. McDonalds has 400 stores in 100 cities, and Kentucky Fried Chicken now has over 30 in Beijing alone. Standardized food with full courteous service, along with the emerging wealth of the urban population is credited with their success. 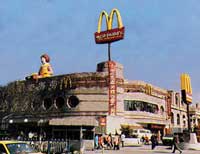 But move over Mac... several home-grown franchise fast-food chains are attracting a following. The Baked Pig Face Restaurant, offers a whole head of pig baked for 12 hours in 30 special herbs and spices. Waitresses patrol the floor helping patrons wrap pieces of pork in pancakes and providing service. They have already opened three restaurants in Beijing with aggressive expansion plans.

Another entry into the market is Scorpion King, whose eateries are attracting big crowds with a healthy menu of fried scorpions garnished with mounds of toasted ants. They have opened branches in several major cities.

While the menu may not sound particularly appealing to a Western palette, a recent survey indicated that two-thirds of the Chinese consumers prefer Chinese-style eateries and menus over the American counterparts.

Neither competitor have plans to expand to the US market yet.