I've owned a set of Baoding "Chinese Exercise Balls" for fifteen years, and have periodically picked them up and twirled them around a few times, thinking that someday I would devote some time to practicing this "healthy" exercise.

When visitors would ask about them, I would explain that when you twirled them about, they massaged the acupuncture points of the hand, and would give them a short demonstration. I made sure to tell them that a set was given to President Nixon upon his arrival to China in 1974, so obviously the Chinese considered them a prized gift.

The balls were always available, sitting on top of the desk, table, or counter... waiting for me to pick them up.

Whenever I saw a set for sale, I would ask about the origin and history of the balls. The typical answer is that they came from ancient China, and they were good for your health. When I asked in China during one of my visits, they left out "came from ancient China" and just said that they were good for your health. Did no one know about the balls?

It was no bearded sage that sat me down and told me the secrets, but a young man that picked up a set of balls and effortlessly twirled them around in a manner I had never seen. Actually, he didn't seem to know much about the history of the balls, but he demonstrated twirling two, then three, then four balls in one hand, and explained more in our brief two-minute meeting than I had heard in fifteen years.

Armed with a little information, and a fresh visual image of how the balls seemed to rotate by themselves in his hand, I practiced relentlessly for a week.

Although I practice Taijiquan daily, my week-long escapade with the balls taught me much. It taught me about the philosophy of Yin-Yang, internal strength, coordination, stamina, and perhaps is making me healthier as well. 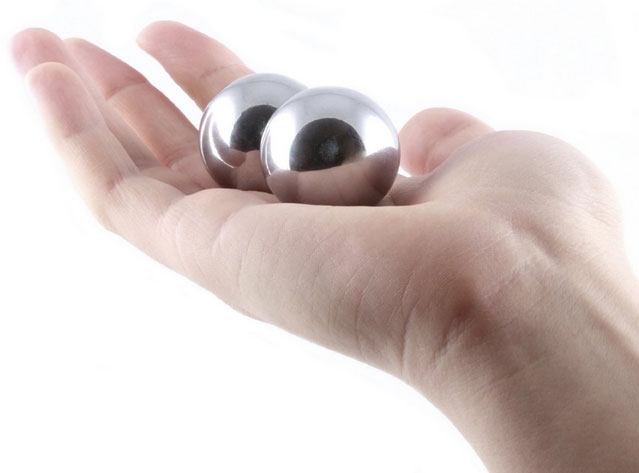 The Baoding ball is thought to originate in Baoding, China, a small city in Heibei province. In that town, they are referred to as "Iron Balls" because they were originally made from solid iron.

In more recent years, the heavy solid ball has been replaced with a hollow, chrome-plated steel model... usually with a sounding plate inside that makes a pleasant tone as the balls are rotated. The balls are still available in solid steel, solid stone, and solid jade versions as well. I have even seen Cloisonne models which must be mostly for display. The hollow chrome balls are by far the most popular and are manufactured by several large factories in China. Several of these modern companies manufacture aerospace products as well.

Although the date of origin is unknown, mass production of the Baoding Iron Ball dates back to the Ming dynasty (1368-1644), and Baoding craftsmen still meticulously produce the majority of the balls we see.

As we are told by most salespesons, the balls work on the meridians much like acupuncture or shiatsu massage. According to Chinese traditional medical theory, these meridians (Jingluo) are channels or pathways through which vital energy (Qi) circulates within the body. Acupuncture points are also distributed along these Jingluo meridians. By means of the Jingluo, the ten fingers are connected with the cranial nerve and vital organs of the human body including heart, liver, spleen, lungs, kidneys, gallbladder, stomach and intestines. By stimulating these points with the Baoding balls, each meridian is stimulated which in turn can create better circulation of vital energy and blood within the body.

As one Chinese brochure states: (literally) "It can cause the jingluo unblocked and thorough, the vital energy and blood to function in harmony. the muscles nimble, the bones strong, the mind sober, can invigorate the circulation of blood, and can prevent and cure hypertension and various chronic diseases. If you keep on taking exercise every day for months and years, you can get the fine results of keeping your brain in good health with high intelligence and good memory, relieving your fatigue, drowning your worries, and moreover, prolonging your life."

After a week of practice I cannot confirm the above claims, but I did find working with the balls a very rewarding experience.

One Size Fits All?

Today, the Baoding balls come in many sizes--mainly because foreigners also come in many sizes. It is recommended that a person start with a size that can be handled easily, then perhaps work up to the larger sizes. The most common sizes range from a diameter of 35mm to 55mm. The 35mm is small and is usually used by children or an adult less than 5'2". The 55mm is best reserved for either the experienced user or someone who is over 6'2".

The chrome-plated steel balls are easy to care for, especially if you are an active practitioner. If you are going to leave the balls inactive for a time, just use a light oil or automotive wax on their surface to prevent rust from forming. They usually come in a strong, specially formed case that holds them and displays them for curious visitors. What other exercise equipment can you display with dignity in your living room?

But please take care of where you hold the balls as you practice. Things I learned from experience ... don't hold the balls high over your head, knees or toes. As a beginner, you will undoubtedly drop a ball, and 10 ounces of falling steel can be quite painful.

As one store owner told me, don't hold the balls over expensive handicrafts or it could turn out to be a very expensive exercise session. A falling ball can easily shatter a glass display case.

When I was younger, I heard that the balls were used as a weapon in China, but my recent research failed to find any reference or reason for throwing expensive exercise balls as a weapon when a rock would be just as effective. I guess if someone attacked you while you were practicing you could use them as a weapon. If you were a true martial artist, you could easily defeat the enemy and then leave a set of balls for them as a friendly gesture to help speed their recovery.

Begin your practice with two balls. Rotate them clockwise and counter-clockwise within your palm. This first step is easy and you will soon begin to experiment, finding that if you hold your hand at a certain angle, gravity will help you rotate the balls.

After you feel comfortable at this level, which should take only a couple of hours of practice, you can proceed to deeper learning. Try rotating the balls smoothly, without them coming apart and clashing together again. As an alternative, you might try rotating them without them touching ... this will work your fingers a little more, and is difficult if the balls are a little large for your hand size.

Another alternative is to turn your palm downwards and rotate the balls. This will build some finger strength and dexterity, much like rotating the balls without touching. Be inventive and try cascading them one over the other, etc.

If you practice for more than fifteen minutes with one hand, you will soon notice that your forearm, shoulder, and hands are receiving a substantial workout. Don't overdo it... relax and rest a bit if your body needs it.

The logical and obvious way of moving the balls is to push them around with your fingers. When one ball pushes against the other, it replaces it and the other ball must move. If your palm is curved, the second ball moves into the position that the first ball occupied and the rotation is begun. Repeating this one simple movement will be enough to begin your adventure with the balls. There are many variations of this theme, and you can use three balls to increase the difficulty. With enough practice, you can even work them around your fingers like a magician.

The Other or "Internal" Method

The next step is like learning an internal martial art. You must begin to concentrate on what makes the balls move around in your palm. When you see someone who is good with the balls, they seem to rotate like magic, with almost no external effort. One important thing I have realized over the years, the obvious way is not always the most efficient way of doing things.

I found that the "other" way of moving the balls is by making space for them to roll into. You can practice this by rotating one ball in your palm. By manipulating each muscle of the palm, and by putting your palm very flat so gravity does not affect the movement, you can make the ball more about. Once you can make one ball move, you can usually get two balls to rotate slowly. Keep in mind that you are not pushing the balls, but giving them a space in which to roll. With practice, you will be able to rotate the balls smoothly and seemingly effortlessly within your palm.

This method requires small, minute adjustments of the muscles which takes quite a bit of concentration and relentless practice.

Relax, concentrate on the body, movement within stillness, stillness within movement... sounds like a meditation, taijiquan, calligraphy, massage, qigong, or yoga class. Once you realize that the concept is the same, you can practice any of these disciplines while you are working with the balls.

To help you master the "Internal" method, you can test your abilities by using three balls. Once you can rotate three balls smoothly (without them separating), you can put a fourth ball on the top and watch it spin in the reverse direction...a trick showed me by the young master.

Another technique which I have seen highly skilled practitioners do, is to rotate two balls smoothly without them touching each other, using almost no hand motion. I have heard stories about people who could do the same with three balls.

One man told me about competitions among older gentlemen in China, where they would meet and compare techniques. Although I consider him the best I have ever seen at manipulating the balls, he said his skill was not worth mentioning compared to these gentlemen.

Do I feel healthier? I must admit, I have not noticed a significant improvement over the last week, except that my arms ache after practicing a half an hour with three 55mm balls. Of course, a week isn't enough time to test any "preventive" treatment, and the balls were never considered effective as a "first-aid" or quick treatment. I think that the balls would be an excellent exercise for persons suffering with arthritis and because I believe in the effectiveness of acupuncture, I feel as though they can help support a preventive health care system such as traditional Chinese medicine.

Although I will probably never be as good as many persons I have seen, at least those Baoding iron balls that I bought fifteen years ago are not going to rust.

With the right attitude, a person can dramatically increase their knowledge of the "internal" arts by using these tools. I now find that they are a comforting friend when I am deep in thought, or when just relaxing and releasing the day's buildup of tension. After my week long intensive study of the balls, I have relaxed and decided to enjoy them instead of conquering them. Perhaps now they can being improving my health.

©Qi: The Journal of Traditional Eastern Health & Fitness, Autumn 1991. The author, Steve Luo, is a regular contributor and long-time practitioner of Chinese martial arts and philosophy.