China celebrates a day like the Western Valentine's day, and it is called Qixi (七夕), or the Double 7th Festival. Sometimes known as Qiqiao (乞巧), it is a celebration of the annual meeting between a Weaver and a Cowherder (oxen herder). Called the Double 7th Festival because it is always celebrated on the 7th day of 7th month when using the traditional Chinese lunar calendar. 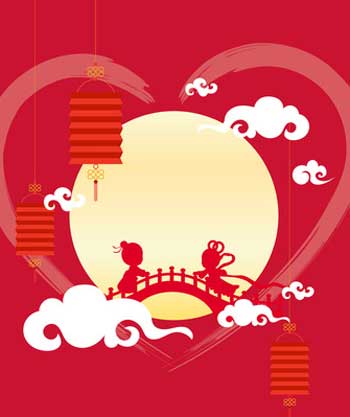 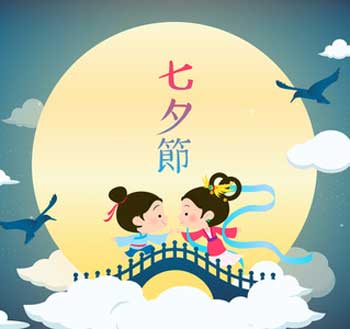 Meeting across the Milky way

Through the varying shapes of the delicate clouds, the sad message of the shooting stars, a silent journey across the Milky Way, one meeting of the Cowherd and Weaver amidst the golden autumn wind and jade-glistening dew, eclipses the countless meetings in the mundane world. The feelings soft as water, the ecstatic moment unreal as a dream, how can one have the heart to go back on the bridge made of magpies? If the two hearts are united forever, why do the two persons need to stay together—day after day, night after night?

Originating from a romantic legend between two lovers, Zhinü (織女) the weaver girl and Niulang (牛郎) a cowherder. The tale dates back to over 2600 years and is referenced in a poem from the Classic of Poetry. So popular in China that it has inspired the Tanabata festival in Japan and the Chilseok festival in Korea.

There are many variations of the story, but the general tale is a love story between Zhinü (the weaver girl, symbolizing the star Vega) and Niulang (the cowherd, symbolizing Altair). Their love was not allowed (a fairy/goddess and a mortal), thus they were banished to opposite sides of the Silver River (symbolizing the Milky Way). Once a year, on the 7th day of the 7th lunar month, a flock of magpies would form a bridge to reunite the lovers for one day.

In modern China, many celebrate much like we do on Valentine's Day. They use this opportunity to find potential lovers and will give each other chocolates, roses, and gifts.

Chinese gaze to the sky to look for Vega and Altair shining in the Milky Way, while a third star forms a symbolic bridge between the two stars. It was said that if it rains on this day that it was caused by a river sweeping away the magpie bridge or that the rain is the tears of the separated couple. Based on the tale, magpies came to symbolize happiness and faithfulness in Chinese culture.

One Version of the Folk-Tale:

A young cowherd named Niulang came across seven fairy sisters bathing in a lake. Encouraged by his mischievous companion the ox, he stole their clothes and waited to see what would happen. The fairy sisters elected the youngest and most beautiful sister Zhinü (the star Vega), to retrieve their clothing. She agreed to do so, but since Niulang had seen her naked, she agreed to his request for marriage. She proved to be a wonderful wife, and Niulang to be a good husband. They lived happily and had two children. But when the Goddess of Heaven found out that Zhinü, a fairy girl, had married a mere mortal. The Goddess was furious and ordered Zhinü to return to heaven.

Niulang was upset that his wife had disappeared. Suddenly, his ox began to talk, telling him that if he killed it and put on its hide, he would be able to go up to Heaven to find his wife. Crying bitterly, he killed the ox, put on the skin, and carried his two beloved children off to Heaven to find Zhinü. The Mother Goddess discovered this and was very angry. Taking out her hairpin, she scratched a wide river in the sky to separate the two lovers forever, thus forming the Milky Way between Altair and Vega.

Zhinü must sit forever on one side of the river, sadly weaving on her loom, while Niulang watches her from afar and takes care of their two children.

But once a year (on the 7th day of the 7th month) all the magpies in the world would take pity on them and fly up into heaven to form a bridge (鵲橋, "the bridge of magpies", Que Qiao) over the star Deneb in the Cygnus constellation so the lovers may be together for a single night.

Cultural note: Although in the same family of birds as the crow, the magpie is universally admired for its intelligence. In China it has a positive connotation, a harbinger of joy and as such a magpie is used in paintings to wish someone joy as 喜 xǐ means 'glad; joy; happiness'. If the character is shown upside down, like fu (good fortune), it means happiness is arriving.

During the Han dynasty, the celebrations were conducted in accordance to formal ceremonial state rituals. Over time, the festival activities also included customs for the public.

Girls took part in worshiping the celestials during these rituals. They went to the local temple to pray to Zhinü for wisdom. Paper items are usually burned as offerings. Girls would recite traditional prayers for dexterity in needlework, which symbolize the traditional talents of a good spouse. Divination could take place to determine possible dexterity in needlework. They make wishes for marrying someone who would be a good and loving husband. During the festival, girls would display their domestic skills. Traditionally, there would be contests among those who attempted to be the best in threading needles under low-light conditions like the glow of an ember or a half moon.

The festival also held an importance for newlywed couples. Traditionally, each family would worship the "celestial" couple for the last time and bid farewell to them. The celebration symbolized a happy marriage and demonstrated that the married woman was accepted by her new family.