You will notice in some Chinese restaurants, especially those serving southern style food and Dim Sum, patrons will often tap their fingers on the table when receiving a refill of tea. There is a quaint story about how this custom became popular. 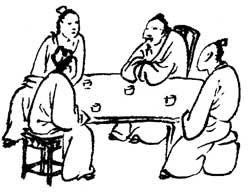 There was a Qing Dynasty emperor (1644-1911AD) who often went on inspections of his land. To find out what the people were really thinking, he would often go incognito to hide his true identity. When ­visiting a tea house in southern China, he took a turn at pouring tea so no one would suspect his status. His shocked bodyguards and advisors wanted to kowtow to him for the great honor he was doing them.

Instead of revealing his identity, the emperor told them to just tap three fingers on the table. This would symbolize a person bowing, with two ­fingers representing the arms and another representing the bowed head.

Nowadays, lightly tapping the table is a way of showing appreciation to the person who poured your tea.