No doubt you have seen examples of amazing Chinese papercuts. The earliest patterns cut out of paper so far found in China are the ones of the Northern Dynasties Period (A.D. 386-581), examples of which are five circular papercuts unearthed from a place near Flaming Mountain in Turpan, Xinjiang. Among these are two papercuts of a pair of monkeys and several pairs of horses.

Officially classified as a folk-art, the discipline grew out of the paper templates used for embroidery and lacquerware. As the templates became more elaborate, using colored paper or hand-coloring the templates became common practice. Much like our traditional exercise systems of taijiquan and qigong, each region of the country has its own style and flair. 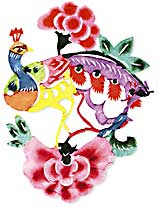 Papercuts were produced for New Year celebrations, weddings, ancestor worship and other religious celebrations as well as given as gifts. Certain designs and colors were created to bring good fortune and wealth into the homes of those who displayed them.

By taking a simple embroidery template and applying the desire and energy (qi) of a rich Chinese culture, an art discipline was created that is known, admired, and collected throughout the world. Another example of taking the ordinary and making it extraordinary.

Multiple copies of large papercuts are cut with scissors by taping up to 8 layers of paper together. The highly detailed cuts are done by stacking several layers of thin paper together and cutting with a scalpel-like knife on a soft wax-like base to prevent them from sliding.

In the countryside, paper cuttings are usually made by women. This used to be one of the crafts that every girl was to master and often used to judge brides. Professional papercutting artists are, on the other hand, almost always men who have guaranteed incomes and work together in workshops.

Note: Recent development of inexpensive CNC-laser devices have changed the art into more of a technical/design discipline instead of a handicraft, but these are sometimes "too perfect" and are mass produced, mostly for the tourist trade. Unfortunately, this is the future of many artistic crafts, both in China and elsewhere.