The traditional Chinese painting is a shining artistic pearl in human history, but may have as a mysterious beginning as human life itself. Some paintings, more specifically the prehistoric rock engravings or sculptures, remain a riddle to modern people. However, we can identify certain characteristics that Chinese paintings share throughout history. 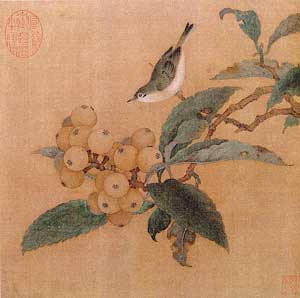 Generally speaking, Chinese paintings dating before the Tang Dynasty (618-907CE) are composed mainly of drawings of people engaged in various activities, and was the golden age of human figure painting. Then from the mid- Tang Dynasty, landscape and flower-and-bird paintings gradually gained dominance. Paintings of mountains, forests, fields, and gardens have the ability to relieve people from the stress of the material world and transport them into a peaceful, carefree realm. Because of this, landscape paintings have always been highly prized by China's literati and officialdom. The flowers, grass, trees, stones, and birds and other animals depicted in the lively and energetic flower-and-bird paintings are also widely admired. Thus the landscape and flower-and-bird types of painting, together with the earlier human figure painting, comprise the three main categories of traditional Chinese painting.

In the Tang and Song dynasties, Chinese paintings were warmly welcomed and highly supported by the governing class. Furthermore, the incentives behind artistic works produced within this period was more serious and had political and educational significance. The works tended to be elaborate and ornate. The Song dynasty court established a well systematized academy of painting. The Emperor Hui Tsung of the Song Dynasty, a lover of fine art and painting and an accomplished artist in his own right, granted special patronage to the painters in this academy and sponsored the training of promising artists. The Academy of Painting reached the zenith of activity in this period.

However, due to gradual social, economic, and cultural changes, more and more men of letters began to take up painting, and literature came to exercise an everincreasing influence on painting. By the time of the famous Song dynasty poet Su Shi (1036-1101CE, better known as Su Dongpo), the school of "Literati Painting" had already emerged. By the Mongol Yuan dynasty (1271- 1368CE), there was no longer a formal painting academy organization within the imperial palace, so the court style of painting declined. At this point, the "literati" school of painting entered the mainstream, and the leadership in Chinese painting circles fell into the hands of literati painters.

Different from the formal painting academy, literati typically prefer to paint according to their own fancy and without restriction, advocating a fresh, free, understated, and elegant style. They were fond of subjects like mountains and rocks, clouds and water, flowers and trees, the "four gentlemen" (plum blossoms, orchids, bamboo, and chrysanthemums). Because natural objects such as these are less demanding subjects to paint than the human figure, the painter can better exploit the brush and ink's potential for free expression.

Whether Chinese painting is "realistic" is the object of frequent debate. Some may feel that it is not realistic, but such an answer tells only part of the story. Realism in Chinese painting peaked in the painting of the Tang and Song dynasties. However, the kind of "realism" sought after in Chinese painting is not an objective reflection of the existence of an object as perceived through the sense of sight, but rather is an expression of a subjective kind of recognition or insight.

The fundamental component of Chinese painting is the line, as is same in Chinese calligraphy. Because of this shared feature, these two arts are usually mentioned in the same force. By the time that "literati painting" had become popular in the Yuan Dynasty, men of letters who painted put even more conscious effort into reaffirming the link to Chinese calligraphy, and actively led a trend to fuse calligraphy and painting. And the close relationship between poetry and painting was formed under the strong influence of literature on painting. Scholar-statesmen and literati led the melding of poetry and painting, and this eventually spread to the academy of painting. The Song Emperor Hui Zong is known to have used poetry to test painters on their ability to express with ink and paper the enchanted world created in written verse.

After the founding of New China, Chinese paintings witness a further change in different schools of painting. The introduction of western realistic style and the start of sketching classes with live models in Chinese art schools unfold a new era in the painting world. 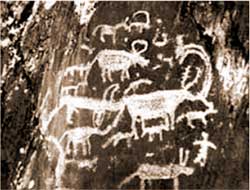 Chinese painting may originate from the decorative patterns on prehistoric pottery. In the Yellow River Valley in Southwest Qinghai, Gansu and Shaanxi provinces and northern Henan Province, a great amount of ancient pottery, made some 3,000 to 5,000 years ago, were discovered with primitive patterns, with black, white and red colors on red pottery utensils such as basins, jars and plates. Even at that time, the design on the painted pottery falls into two styles: abstract ones and realistic ones, such as figures of humans, animals, insects, etc.

The most common abstract patterns are wavy, rotary, circular, sawtooth and net-mesh designs. The lines are smooth and neat, symmetrical and balanced, following certain rules. Unearthed in Majiayao in Gansu Province, many pottery bearing the wavy and rotary designs drawn with smooth and balanced strokes unfold a peaceful life in primitive Chinese society, with men fishing and hunting, and women doing housework and collecting vegetables and fruits. Later than that, the unearthed Banshan and Machang painted pottery, the designs varied. More sawtooth, circular and frog-shaped patterns appeared, which look wild and enigmatic. Chinese primitive society was breaking up and social reforms were being undertaken during that period, as were reflected in the art designs. 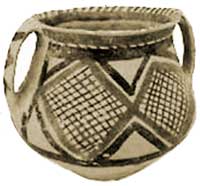 The realistic pottery designs look more vivid. The animal designs drawn on painted pottery unearthed in Banpo Village in Xi'an, Shaanxi Province, have simple but descriptive patterns, such as swimming fish, running deer and barking dogs. These designs demonstrate that ancient Chinese artists were good at depicting the movement of animals. On a painted pottery basin unearthed in Datong County, Qinghai Province, there is the design of five dancing people standing in a line, hand in hand. This design can be seen both as an ancient picture and an ornamentation.

The primitive artists of Banpo Village began using pictorial designs for decorative purposes and express abstract thoughts. For example, they divided the design of a fish into head, body and fins, alternating straight lines with curves, triangles and circles. This innovation was a significant step in the development of Chinese painting. On a painted pottery basin from Banpo Village, for instance, we see the design of a human face with a fish's body. According to archeologists, these patterns may have been used for decorating the utensils; but they may also have been used for sacrificial rites in the spring season to pray for a good harvest. If that were true, the Banpo pottery designs might be the earliest religious artwork in art history.

Rock painting is another art form that precedes later developed Chinese painting. Many human figure designs on rock were discovered in different places in China, which were very vivid in look, showing that the artists of the work boast high craftsmanship. One important finding is the rock paintings in Mount Huashan, which is about 221 meters (725 feet) wide and 40 meters (131 feet) high, the largest of its kind in China. There are 1,819 figures in the painting. Some of the figures are strong and tall with a knife at the waist, with animals, bronze drums and gongs around them. One assumes these are tribe leaders. There is something mysterious and puzzling about the entire painting.