Dr. Daniel Keown. "Qi and Channels explained…" YouTube. [Go to 1:03 on this video to actually see the qi in action.] 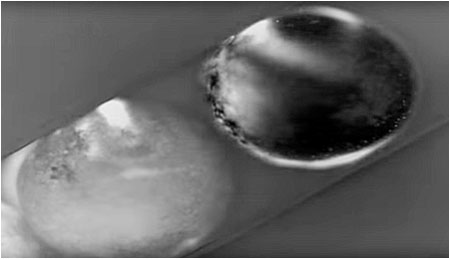 The embryological control system uses electricity, or as I call it "electr-qi-sity" But this is slightly different electricity because it's intelligent electricity. ... This is the first video of qi. … a physical representation of qi. You can actually see the energy that's moving around in the body. From: "Food for Thought with Dan Keown." YouTube.

The existence of a universal life motivating energy is a basic cultural belief in China where it is called "Qi." In Japan where it is called "Ki," and in Hinduism where it is called "Prana." Curiously in the west it is largely disregarded, or generally thought to be illusory. For example, Wikipedia, the standard reference book of our times, says "Qi is a non-scientific, unverifiable concept." Wikipedia.

To offer the qi-unbelievers the almost infinite examples of the manifestations of qi in the universe around us and in the multitude of life functions within us; or the many Chinese scientific studies of qi successfully used in Traditional Chinese Medicine, is not enough.

Skeptics in the west (as well as those in the east) might tell us such things as, It is invisible, intangible and immeasurable, therefore it is unreal and does not exist. To tell them that qi—(which is not "energy" per se but shows itself as the origin and motivating force of all energetic manifestations)—is analogous to the electricity of science in that you can not "see" electricity but only sense and document its manifestations (for example as light, heat, things moving, etc.) is not enough. They might answer, We experiment with electricity all the time. That way we know it's real. If there is evidence of your "qi" in scientific laboratory we might possibly be more open minded about it's existence.

What they were asking for actually happened in a laboratory at Tufts University in Massachusetts in September 2009. Biologist Dr. Dany S. Adams, more on a serendipitous hunch than anything else, set up a time-lapse video camera to record an early stage of tadpole development and went home. She really didn't expect to find anything: such filming in the past usually only produced blurry images. When Dr. Adams came to work the next morning, as she had expected the image on the computer monitor was out of focus. But when she finished processing the rest of the images, she found they were clear. What she saw she says was, "jaw-dropping." … "unlike anything I had ever seen. I was completely blown away."

What she saw had never before been knowledgeably witnessed by any other scientist: patterns of visible bioelectrical signals outlining where the eyes, nose, and mouth would appear in a developing embryonic tadpole.

Dr. Adams called these flashes of light she saw triggering and activating the DNA of genes to form the facial features of an embryonic frog "bioelectric." From New Scientist

What she may not have known is that "bioelectricity" is a standard definition for the existence of qi in all living creatures. In any case, she offers us the possibility that now we may have the scientific proof that qi (understood as bioelectricity) physically exists and can be visually documented in a western scientific context.

And not only that, but also qi is the motivating force of an embryo's development into adult maturity; and that qi also functions as the blueprint[1] or matrix for that development—(that means for you the reader and me the compiler of this information, as well as for that tadpole, qi is the fundamental cause of our existence). In later experiments when this operative qi was disturbed freakish bodily abnormalities appeared.[2] When the operative qi flow was stopped, all cell division ceased and death immediately ensued.

We've quickly covered a lot of information, now it's time to do some defining:

Qi (气 - and pronounced "chi") is often defined as "energy" but that can be misleading. As with so many other Chinese words, a verbal concept gains its meaning from the context in which it appears and how it functions. This is even more so with the word "Qi."[3]

In traditional Chinese thought Qi exists externally in the very fabric of the universe as omnipresent energy and consciousness. When talking about the qi that flows in our bodies keeping us alive and healthy it often is defined as "vital energy" or "bioelectricity." Some philosophers also wrote that Qi carries within itself the master organizational plan (a universal matrix at times called "Li" – 理 in Chinese) for the development of life. This kind of qi is called, "Yuan Qi."

Science has no answer how the one cell formed at conception can grow into the miraculously complex system of trillions of cells that each of us has become. Where is such an organization system, such a "blueprint" stored? But here is a possible answer: and it is called Yuan Qi. And that is where our tadpole embryo comes in. But first a few more definitions.

The life producing qi that this article is talking about is best defined as Yuan Qi - 原气. Its basic meaning is "Original" – "Primordial" - "Prenatal" – "Inborn" Life Force.

Bioelectricity refers to the electrical, magnetic or electromagnetic fields produced by living cells, tissues or organisms.

We've all heard of the genetic code—the genes in our DNA determine much of what we humans, and every other living organism, become. Some research now indicates that in addition to a genetic code, there may also be a bioelectric code, which guides the formation of shape in living systems through differences in voltage potential across membranes of cells….If we could understand and control this pre-pattern of electrical activity—unlocking the bioelectric code, if you will—the information could have huge implications for biomedical research from tissue regeneration to tumor suppression. …This research could also be relevant for treatment of a variety of cancers. Cancerous tumors can result from the disruption of the electrical signals that normally orchestrate the behavior of single cells into the anatomical needs of the body… this technology could revolutionize cancer therapies. www.whatayear.org

More About the Frog Embryo Experiment. "The [video] footage reveals three distinct stages of bioelectrical activity. In the first stage, a wave of negative charge sweeps across the entire embryo - the first bright flash in the video. In the second stage, a pattern of light and dark patches appears, which overlaps with areas where genes for head patterning are switched on, and seems to match the placement of the eyes, nose and mouth. In the final stage, a flash of electricity happens just before the embryo undergoes a growth spurt.

"We believe this bioelectrical signal is a 'pre-pattern' - marking areas on the embryo that will become certain craniofacial structures," says Adam's colleague Laura Vandenberg. "What was most amazing was that this bioelectrical information is used to 'instruct' most if not all of the facial structures - the jaw, eye, nose, and otolith [a kind of ear bone]." New Scientist.

Possible Benefits For Future Research And Analysis. If we could understand and control this pre-pattern of electrical activity—unlocking the bioelectric code, if you will—the information could have huge implications for biomedical research from tissue regeneration to tumor suppression. www.whatayear.org

Concluding Comments. Although it may sound like science fiction, what we actually have here is a possible way to conquer cancer, and possible ways for body-brain rejuvenation, each leading to that elusive and seemingly impossible goal of Daoist physical immortality. That of course is beyond what this article and its author can do. Never-the-less, Yuan Qi is said to reflect and contain infinite possibilities, and there are so many possibilities in the western and eastern uses of its potential infinite biomedical powers that I believe such things are possible. Special thanks and kudos to Dr. Daniel Keown and Dany S. Adams for bringing this information to the world.

[1]^ More from Dr. Daniel Keown: "Qi is the energetic blueprint from which matter is made manifest. We are one cell that develops into trillions and trillions of cells in our perfect complex organisms. There is an energetic blueprint on how that forms, and that's Qi." www.liberatedbody.com

[2]^ "By tweaking bioelectric properties, Tufts researchers have prompted tadpoles to sprout new tails past the normal stage of regeneration and have produced all manner of odd creatures, including tadpoles with working eyes on their backs, four-headed flatworms, and frogs sprouting toes at the site of an amputated leg. Applied to humans, these techniques could one day be used to regenerate lost limbs and damaged tissue, replace organs, and repair birth defects." scienceonscreen.org

[3]^ Qi in common speech has more than three hundred somewhat related meanings when combined with other words. www.chinesetools.eu/chinese-dictionary

[4]^ Primordial Qi (Yuan Qi) is also called "Inborn Qi," "Primary Qi," or "Genuine Qi." It is the most important and fundamental of all, originates from the congenital essence (the innate essence stored in the kidney). But it also depends on the supplement and nourishment of the acquired essence developed in the spleen and stomach. It is received from heaven and combined with food essence to nourish the body. It commences from 'the vital gate', the portion between the two kidneys, passes the triple warmer and circulates throughout the body. It goes inward to the five viscera and six bowels and outward to the superficial layer of the body. It goes everywhere and acts on all parts of the body. The primordial Qi has the functions of both activating growth and development and promoting the functional activities of all the viscera and bowels, channels and collaterals, tissues and other organs. Therefore, it is the motivating power of the vital activities of the human body. If Primordial Qi is deficient due to a congenital defect or improper feeding after birth, the functional activities of the whole body will become weakened." An Approach to the Nature of Qi in TCM–Qi and Bioenergy, Recent Advances in Theories and Practice of Chinese Medicine, Prof. Haixue Kuang (Ed.), ISBN: 978-953-307-903-5, InTech, DOI: 10.5772/28416. qi-encyclopedia.com

The Spark Within The Machine With Daniel Keown (LBP 046); [podcast].

Reprinted with permission from Qi Encyclopedia and the author.