The ability to establish and maintain connection while engaged in hand combat is a skill held in high esteem by tàijíquán (太極拳) practitioners throughout the art’s long history. In their writings, early taijiquan masters sought to identify actions and qualities that players should cultivate in order to produce optimal conditions for sticking-adhering in martial arts situations, and to caution against those actions and qualities that lead players toward deficient connection.
By Sam Masich

The Celebrated Cultivation of Masters

Masters Wang Chongyang, Ma Danyang, and Qiu Chuji. Within a lineage, it may have taken many lifetimes for given individuals to have come to the point of ripeness where they will awaken to and realize the Tao. And even between lineages, such as we see in the transmission passing from Master Wang Chongyang to Master Ma Danyang and then to Master Qiu Chuji—from Quan Zhen (Complete Reality School) to Yu Xian Pai (Sect of Meeting Immortals) to Dragon Gate—there is a ripening process at work. This ripening process created the remarkable cultivation of Qiu Chuji, a cultivation that allowed him to embark on a mission to prevent Ghengis Khan from further devastating the Chinese people.
By Jill Gonet MFA

The name Baduanjin can be translated as “Eight-Section Brocade”. The number eight doesn’t merely refer to the different segments, or to the eight movements of the routine, but rather means that the sequences are comprised of many elements, which restrict each other, connect each other, and form cyclical motion. During the Ming Dynasty, Gao Lian wrote in the Baduanjin Guidance Methods, chapter of his book, Zun Sheng Ba Jian, that practicing this sequence during the noon time can make a harmony between yourself and the universe. Based on the eight-trigram theories of Chinese tradition, the motions of this routine are said to lead to a positive cycle of health cultivation.
By Yonatan Asher Vexler & Chen Danqi

Listening: Gateway to the Internal

Just as Taijiquan is considered a dynamic form of qigong for health enhancement (finding stillness in movement and vice-a-versa), Push Hands has therapeutic applications as well; at the very least is the reduction of stress. To practice Push Hands effectively requires a great amount of sensitivity, relaxation, and precision. Yet, how can Push Hands and the Thirteen Principles be actualized, let alone utilized in Pushing Hands? Is the form of any use once Push Hands is emphasized in practice?
By Gerald A Sharp

Departments include “The Calligraphy of Taijiquan Footwork” by Yang Mingbin and translated by Michael A. DeMarco, M.A. He starts by mentioning “written records of immortals who can float on clouds, run across the surface of ponds, a

nd walk over snow yet leave no trail”. If that grabs your attention like it did mine, read further as he examines the parallels between the footwork of taijiquan and the brush strokes of Chinese calligraphy. Steven Luo gives a brief description of the Spring Festival and it’s activities in “2022: Year of the Water Tiger”. Then Susan Darley, PhD. shares “It’s The Thought That Counts: A Beginner’s Taiji Tale” as she remembers her experiences attending her first classes with Master Zhang Yun. But most importantly, how the classes has changed her perspective and how it has even affected others. As she states, “It’s the thought that counts!”

We hope you enjoy this, our 124th consecutive issue. 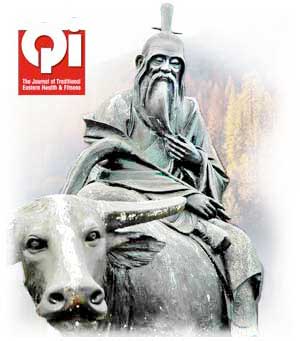